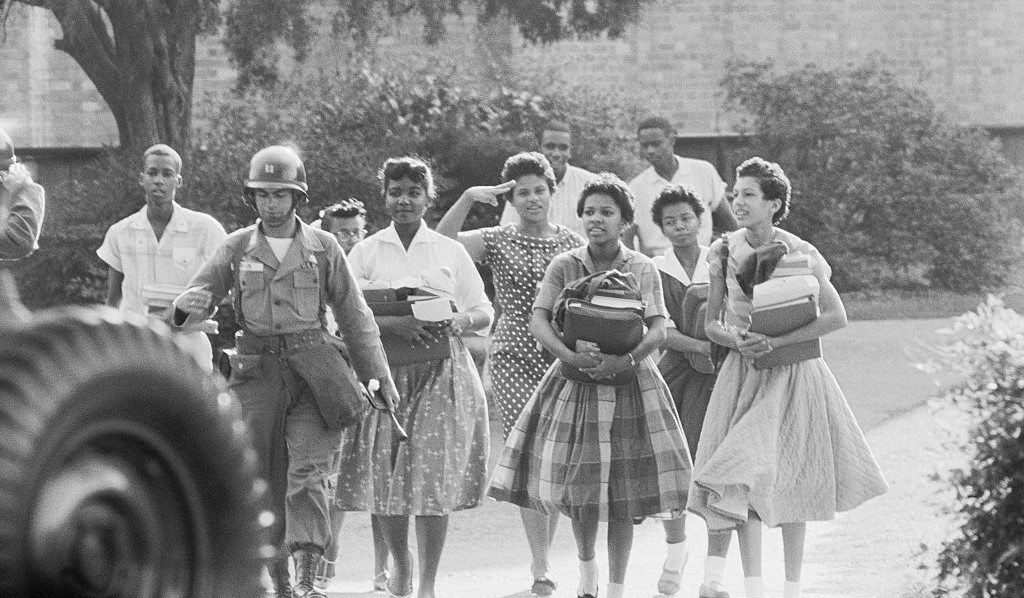 Sixty-five years ago, a group of nine African American teenagers volunteered to be among the first to help desegregate Central High School in Little Rock, Arkansas. The three boys and six girls became known as the “Little Rock Nine.” One of those nine brave students was Terrence James Roberts, not yet 16 years old. He would go on to become a core faculty member and co-chair of Antioch University’s Master of Applied Psychology program in Los Angeles in 1993. He retired from Antioch in 2008, but his place in American history will be eternal.

Ironically, the high school Terrence Roberts had been attending was named Horace Mann Senior High School which had opened one year earlier in 1956. It was one of two new public schools built to address the Supreme Court’s ruling in Brown v. Board of Education of Topeka. Horace Mann SHS was built in a predominantly Black eastern neighborhood of Little Rock, while the other school, Hall High School, was built in an affluent white, western neighborhood. The result was continuing de facto segregation based on “neighborhood” schools. Horace Mann SHS had an almost entirely Black faculty, and the other an almost entirely white faculty. Recognizing that the new neighborhood schools would likely not satisfy the requirements of Brown, the Little Rock school board adopted a new plan to slowly integrate their schools and requested volunteers to begin the process in 1957. The risk of violence was clear and the courage of The Little Rock Nine captured the nation’s attention.

The systems of racism in public education were deep, and the terror they faced as young teens must have been unimaginable. When the nine students got to the school that warm September morning, a mob of over 400 angry parents and townspeople prevented them from entering. Resistance and foot-dragging to the 1954 ruling in Brown was so widespread that a second decision had to be issued by the Supreme Court a year later ordering school districts to integrate “with all deliberate speed.” Yet, the governor, Orval Faubus, claimed that the nine students were being barred from entering “for their own protection.” President Eisenhower was forced to call in the National Guard to accompany the students to school, and military personnel were deployed at the school for the rest of the school year. The violent opposition to integration continued to be so intense that the school was closed for the 1958-59 school year as a stand against integration.

When the school was closed, Roberts moved to Los Angeles to live with relatives and completed his senior year at Los Angeles High School. From there he went to UCLA and Los Angeles City College, eventually graduating from California State College in 1967 with a Bachelor of Arts degree in sociology. He forged ahead to earn a master’s degree in social welfare from the UCLA School of Social Welfare in 1970, and then a PhD in psychology from Southern Illinois University in 1976.

In 1999, President Clinton awarded Roberts and the other members of the Little Rock Nine the Congressional Gold Medal “for their pioneer role in upholding the basic ideals of American democracy in the face of continuing harassment and constant threats of bodily injury. The award recognized them as “civil rights pioneers whose selfless acts considerably advanced the civil rights debate in this country.” It is Congress’ highest expression of national appreciation for distinguished achievements and contributions to society by individuals or institutions. As of June 24, 2021, only 173 institutions, people, or events have been awarded a Congressional Gold Medal since its inception in 1776.

We honor Terrence James Roberts, PhD, and the many children of color who, like him, have bravely confronted the systems of racism in public education, who put their own personal safety at risk, and who, like 6-year-old Ruby Bridges, opened the doors for the generations of students behind them seeking equal opportunity in education. We are inspired by these young people who bravely answered Horace Mann’s plea to “win victories for humanity,” and who contributed to the building of a more inclusive American democracy.