Our democracy, our nation, and our values are under attack, and the insurrection at the Capitol on January 6, 2021, by a mob of fascist, white supremacists could not be a more disturbing reminder of that fact for all of us. You’ve all seen the images. They are alarming reminders of how polarized and racist this country still is and how vulnerable we are to domestic terrorists. 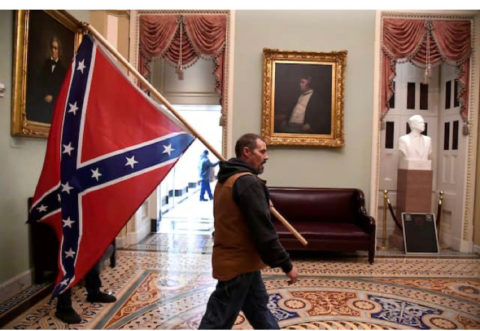 But, perhaps one of the most disturbing images for me was this image of a man calmly carrying a large Confederate flag through the second floor of the Capitol, a flag that had never in its history breached the doorsteps of the Capitol, even during the Civil War. Its presence there was a desecration of the Capitol, the “House of the People,” by a flag that has never been a flag of this nation, but instead a flag of an insurgent, racist, and terrorist force that sought to secede from the Union in order to preserve slavery, white supremacy, and white fascism. It has been a symbol of fascism since the Civil War through the period of Jim Crow and beyond.

Ironically, the photograph shows the man blithely carrying that flag, that symbol of slavery, past a portrait of former Senator Charles Sumner, an ardent abolitionist who served in Congress at the same time as fellow abolitionist Horace Mann. In fact, Mann and Sumner were colleagues elected from Massachusetts. Even more ironically, it was Sumner who was the last victim of a violent attack on the floor of the United States Senate. In 1856, after Mann’s term expired and while he was serving as Antioch’s first President, Sumner gave an impassioned two-day long speech on the floor of the Senate strenuously opposing the admission of Kansas into the Union as a “slave” state and reviling the “rape of the virgin territory” by southern slave states “compelling it to embrace their depravity.” Two days following the speech, he was attacked by a House member from South Carolina, who entered the Senate floor and viscously beat Sumner over the head with a metal cane until he was unconscious. Sumner survived, but could not return to his duties in the Senate for three years.

Almost 165 years later, a Confederate flag emerges to cast its cold shadow on Sumner’s portrait, and we are left to wonder, “How is this possible?” How is it possible that after all these years, we are still a nation so divided by hate, so infected by racism, that we could embrace a narcissistic, authoritarian demagogue as President and then engage in an insurrection to overturn an election and keep him in power? Clearly, we must address those haunting questions as a nation and there is not much I could say here today that has not already been said.

But, on this day, in which we give honor to the late Rev. Martin Luther King, Jr., I write simply to say that I have hope. I have hope for two important reasons. First, we have an inauguration of a new President on Wednesday, along with the swearing in of the first Black woman and Asian-American Vice President in our history. Over 80 million Americans have rejected the divisive, racist path we’ve been on for the past four years, and we are leaving this dark period of American history behind us.

Second, I’m reminded of Dr. King’s insight that “the arc of the moral universe is long, but it bends toward justice.” I believe he’s right. The universe will bend inexorably toward justice. Having said that, I’m also reminded of his admonition delivered to graduating students of Antioch College in 1963, that “human progress never rolls in on the wheels of inevitability.” We must work for it. We must lead. He continued, saying that:

The great challenge facing us is to be participants, involved participants, in the struggle to make brotherhood and justice realities…. There are still too many detached spectators.… But, in the words of the first President of this College, the great Mann, “be ashamed to die until you have won some victory for humanity.” This means becoming involved in all the struggles of mankind, to make this nation, to make this world better. It means that we must develop a sort of divine discontent.

We all stand on the shoulders of so many who came before us in the struggle for civil rights, human rights, and social justice, including Senator Charles Sumner, Horace Mann, and the Rev. Martin Luther King, Jr., not to mention the generations of people at Antioch University who fought to further Mann’s mission. I’m proud to be part of this noble institution of people, both past and present, who felt the “divine discontent” and who worked to ensure through their teaching and scholarship and support that the arc of the moral universe will indeed bend toward justice—more quickly and more acutely—with each passing day.

And as that arc bends, the more unlikely it will become that any traitorous flag, or vile symbol of hate, racism, or fascism will ever again darken the doors of Congress, or pass by the portraits of the nation’s abolitionists and historic leaders.

The 22nd President/Chancellor of Antioch University, Groves has served as Chancellor since 2016 and has focused on three priorities; to reclaim and advance its reputation as an innovator in higher education; to grow programmatically and geographically in ways that will allow Antioch to reach its full potential to advance social, economic, and environmental justice; and to advance and promote the University’s 170 year-long history and heritage around social justice and democracy building.
PrevPreviousThe Graduate School of Leadership and Change Awarded Funds to Support Positive Social Change To Build Bridges and Tear Down Walls
NextDr. Adonia E. Lugo Joins Institute for Transportation & Development Policy U.S. Advisory GroupNext